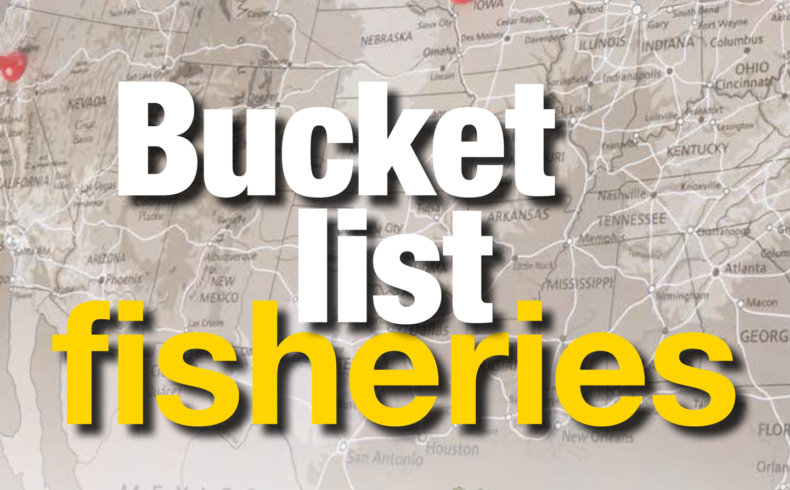 If you've heard of it, Gary Klein and Kevin VanDam have probably fished it. If they haven't been there, you probably don't need to go.

Between them, they've fished nearly 700 Bassmaster tournaments and dozens of competitions on other circuits. If there's a quality bass fishery they've missed on the tournament trail, they've probably visited it for some other purpose.

They know the difference between a great fishery and a world-class experience, so when  they tell you about the places they want to go, it pays to listen. None of us has the time or resources to fish everywhere, but if you're planning a once-in-a-life-time trip, it's unlikely you could do better than to ask these two champions.

We caught up with the two veterans and asked them to give anglers with less travel under their belts a list of "must-visit" places. Here are their thoughts.

Where to go for the largemouth trip of a lifetime

VanDam didn't hesitate when asked to identify the best public largemouth water in the world. It's Mexico's Lake El Salto, he proclaimed, and the bonus is that it's a relatively easy trip. You'll be coddled ll the way.

"I've been to Billy Chapman's Anglers Inn several times", KVD said. "Billy makes it really easy. The service is fantastic, and part of the excitement is the experience of going out of the country. It's never a bad time."

Just as importantly, it was the locale for the biggest limit of KanDam's life. While filming a television program with Shaw Grigsby, he had a day when his best five fish weighed 50 pounds, all on a big spinnerbait.

"There's never a bad time to go," he explained. "New lakes are always coming up in Mexico that produce good numbers, but El Salto has stood the best of time as a trophy lake. Two things that impressed me the most are the sheer power of the 3- to 7-pounders there and the variety of ways you can catch them."

Klein's green-fish favorites are slightly closer to home. "If you want unmolested largemouth, go up North," he said, referring to the lakes of states like New York, Minnesota and Wisconsin. "It seems like nobody fishes for them."

His favorite waterway for the complete experience, however, is the California Delta, not far from where he grew up in Oroville. "Within 50 square miles, you have five major rivers, and I don't think there's a bad place to fish," he said. "It seems like you can catch some just about any place you drop the trolling motor.

What makes it so special for Klein? First off, it has Florida-strain bass, so "you can catch a 10-pounder on any flip." Also, it's tidal, and for a student of the game who relishes the challenge of figuring out new situations, a waterway where "it's changing by the hour" presents an especially tempting opportunity.

Where to go for the smallmouth trip of a lifetime

Klein believes that in many cases the nation's smallmouth fisheries are "much better than they've ever been," which makes it difficult to choose just one. He recalls the days when 16-pound limits of brown fish were considered huge; "now, 16 pounds doesn't even get you a second look" on the world-class fisheries.

He's enjoyed banner smallmouth fishing on all of the Great Lakes, but the Buffalo region of Lake Erie holds a special place in his heart because it produced a five-fish string of bronzebacks for him that totaled over 36 pounds. For anglers who don't care to risk the big water, Klein said that the Thousand Islands region may be a better option.

VanDam sticks to the Great Lakes region, but not strictly to one of the five members of that group.

"I still think for size and numbers, you can't beat Lake St. Clair in May," VanDam said. "The lake is just a giant flat, and it supports an incredible number of fish."

The smallmouth season doesn't officially start until the third Saturday in June, but he believes that the catch-and-release period of April and May is the absolute best time to go.

"It's easy fishing," he said. "One-hundred-fish days are not out of the question, and 50-fish days are the norm. You can catch them a wide variety of ways, too - drop shots and tubes, of course, but also spinnerbaits and jerkbaits."

Where would they want to fish a tournament where they haven't previously competed?

"There aren't many world-class fisheries that I haven't been to multiple times," Klein said. That would seem to be both the beauty and part of the burden of being a pro tournament lifer - the fact that there are few things you haven't experienced. Fortunately for Klein, tournament angling presents new challenges every time out.

"Just because I've fished a place multiple times doesn't mean I'm any less excited than the new guys are," he said. "I get jacked for these tournaments." While he couldn't think of a superlative large-scale venue where he's yet to compete, he said that there are hundreds if not thousands of lakes that could support a smaller field or hole-style course that would get him excited.

"I've taken several trips up to Spirit lake, Iowa, where Berkley is located," he explained. "You could take a four- or five-day road trip up there and hit three or four little lakes each day. There are some absolutely phenomenal fisheries that never get fished, more of them than you could fish in a lifetime, and you could do it with a small boat."

VanDam, who said, "I never really go anyplace except to fish a tournament," had the same thought.

"There are all kinds of smaller to midsize lakes up in Wisconsin and Minnesota that don't get any pressure. Most people up there fish for walleye or crappie or Northern pike or muskies. There probably aren't any places that are truly big enough to have a Elite Series tournament, but we could have a small-field event. We could be on an incredible largemouth fishery one day and a great smallmouth fishery the next."

The pros' paths not yet taken

Asked to pick a spot he hasn't been to, any place in the world for any species, Klein first thought he'd like to head to the Pacific Northwest and catch a 400-pound sturgeon, "just to say that I've done it." Upon further reflection, however, he decided that a locale even more accessible to many anglers would top that on his list.

"I want to go catfishing on the Mississippi River with Bill Dance," he said. "The second event I ever fished after I left home, I won on Lake Powell, and I beat Bill Dance. That was huge. We've been superclose ever since then, but we've never been in a boat together. We've toked about it for years, but we've never done it. I've never caught an 80- or 90-pound catfish, either, but it's not because of the fish; it's because of the individual."

VanDam, who in addition to fishing in most of the states has also fished in Spain, Mexico, Canada, Brazil and Venezuela, said that his dream trip is to head to Alaska to fish for salmon and trout. While it would be far from home, it would also be a return to his roots.

"I grew up doing a lot of salmon and steelhead fishing," he explained. "I like clear rivers and streams, especially when I can sight fish for them. It would be a hard thing to set up timing-wise, but it's definitely at the top of my bucket list."