The Brazil Boys by Dave Precht 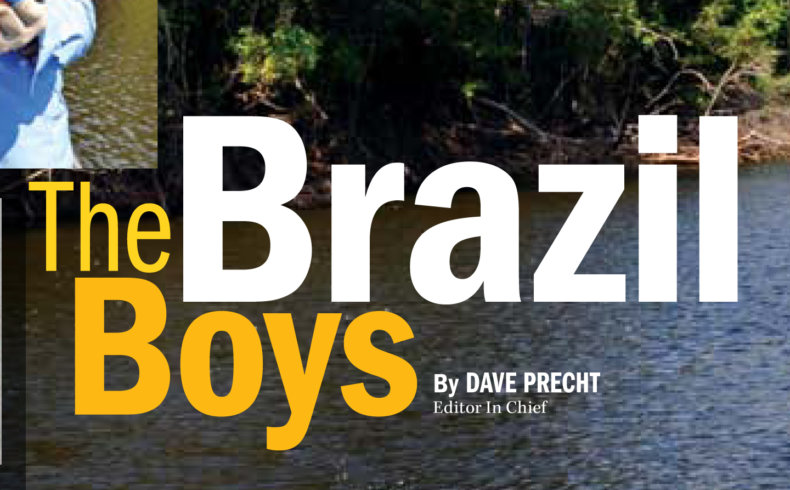 The Amazon jungle is a forbidding, dangerous place. Since the first Europeans landed on the shore of South America 500 years ago, thousands of adventurers have entered the gigantic rain forest and were never seen again. After explorer Percy Fawcett disappeared, along with his son and a friend, in 1925 during the last of his attempts to find El Dorado, the city of gold, more than 100 people perished trying to find the men.

They died at the hands of unfriendly tribes of native South Americans, or from disease, insects, drowning or starvation.

Starvation? If only they had packed some red-and-yellow bucktail jigs and some 7-inch Woodchoppers, they'd have had plenty to eat, I thought, as my guide, Ney, unhooked yet another chunky peacock bass. He whacked it over the head with a pair of pliers and stowed it under the back bench of our aluminum fishing boat. The fish would make another appearance that evening at dinner, fileted, sprinkled with a wonderful Brazilian seasoning mix and grilled over a fire pit.

After reading about explorers who emerged from the jungle emaciated, I felt guilty for having gained a few pounds during my seven days on the upper Jufari River, a tributary of the Rio Negro. And while early adventurers had to sleep fully clothed and shrouded in mosquito netting to endure insect swarms, my friends and I slept blissfully in our air-conditioned floating "suites" each (continued)

But the food and accommodations weren't the reasons I had traveled more than 3,000 miles to the center of the Amazon region. Like hundreds of other bass anglers from the United States who fly to Manaus, Brazil, each dry season, I had come to catch the giant, powerful peacock bass.

They're not really bass - they're actually members of the cichlid family - but they bite like bass, and they fight like bass… on steroids.

It was the trip of a lifetime for me, fulfillment of a long-held dream, No. 1 on my bucket list of fishing experiences. And it did not disappoint.

Like most great fishing trips, the last day was the best day, so I'll begin there.

My partner that day was Dr. Hobson Bryan, a professor at the University of Alabama, who in his spare time competed in exactly 100 Bassmaster tournaments. Our party of of four pairs of anglers drew names to see which guides we'd go out with that last day, and we won the lottery with Jardel, who had guided Bryan to a 21 1/2-pound peacock a few days earlier.

All the guides were good, but Jardel seemed to have the fish dialed in that week. He took us to a small pocket off the main river, a cove no more than 25 acres in size and averaging about 3 feet deep. If you stood on the casting deck, you could see lighter colored areas, roughly the size of truck tires, beneath the tannin-stained water. These were our targets.

“These fish are bedding!” Bryan said. “I’ve been saying all week these peacocks seem to be spawning, and no one believed me.” Seeing was believing for me. We had only to get a lure near one of the white circles to get an explosive strike.

While most of our party had spent the week performing the arm-wrenching ripping retrieve required by Woodchoppers, Bryan had taken outfitter Billy Chapman Jr.’s advice and tied on a Rapala X-Rap SubWalk. After catching the 21 1/2 on the bait, he saw no need to wear himself out with the ’chopper. Nor did I.

We started off with 5- and 6-pounders. Then a much bigger peacock engulfed the plug and headed for a wad of roots and vines. It pulled off, straightening some of the hooks. We paused to replace the stock trebles with heavy-duty versions and went back to work. (The heavier hooks actually seemed to improve the performance of the baits. The peacocks thought so, at least.)

The money technique involved working the SubWalk from side-to-side with the same rod-twitching, reel-turning motion that makes a Zara Spook walk the dog on the surface. Spooks caught plenty of peacocks for us that week, but the underwater walking bait did even better.

What I missed in doing that, though, were the explosive strikes on Woodchoppers and other surface baits. Several times, 10-plus-pound peacock bass hit so hard, they knocked the heavy plugs head-high into the air. If you ripped it just right when it returned to the water, they’d bat it again, and again, before hooking up. It’s a sensation bass fanatics can almost imagine, and one they should hope to experience.

Jimmy Yarbrough, a B.A.S.S. Nation member and the most intense fisherman in our party — he caught 40 fish heavier than 10 pounds in 6 1/2 days — compares the disposition of a spawning peacock to “Mike Tyson on a bad day.”

After hooking an 18-pounder on a Woodchopper, he said, “It was all I could do to hold on as the fish ripped off yards of line in a powerful surge that has to be experienced to be fully appreciated.” With 65-pound braided Spiderwire, you have to keep drags relatively light and accept the risk of a fish making it into the trees. Fish smaller than 18 pounds have the ability to straighten saltwater hooks, pull trebles out of the baits and straighten split rings.

The peacocks didn’t miss the subsurface baits very often, but they compensated for their low-key strikes with acrobatics once they felt steel. Most 10-pound largemouth bass just wallow on the surface, but an 18-pound peacock will turn cartwheels trying to shed the hooks.

By noon, that small cove had given up 11 fish weighing more than 10 pounds, along with dozens of smaller ones. We kept track of the weights: four 12s, a 13, a 14, two 16s, a 17, an 18 and one almost 19 pounds. Almost all of those fish were pacas, or peacock tucunare, as they’re known in Brazil. These peacocks average around 6 to 7 pounds, and anything heavier than 12 is bragging size. A 20-pounder turns heads, and the current world record is 29-1. The other species is the butterfly tucunare, and most of them are small, although no less beautiful.

When Jardel netted a big butterfly peacock I had hooked, his eyes grew wide. He put it on the Boga-Grip. “Twelve pounds,” he announced. “I’ve never seen one over 11!” Indeed, the IGFA all-tackle record weighed 12-9. I didn’t realize the significance of the catch until I had returned to the States.

I’m bragging about the fish and the fishery here, by the way, not the fishermen. And to put it in perspective, our first five and a half days were somewhat less productive. During the week, our group of eight boated close to 1,000 peacock bass, according to the guides’ very conservative count. It sure seemed like more. Including the numerous other species — dogfish, monkey fish, piranha and others — it was.

Companions Don Logan and Jim Copeland, co-owners of B.A.S.S., had fished the Amazon previously, as had Bryan. All three agreed that the fishing was better during our trip last January than they had ever experienced. Other members of our party — Tom Curl of Milwaukee, Jack Odle of Birmingham and Bruce Akin, CEO of B.A.S.S. — also called it the trip of a lifetime.

Much of the credit for that great fishing action goes to the flexibility of the “floating suites” Chapman uses in his Anglers Inn Amazon. Chapman is well-known for his Anglers Inn Lodge and bass fishing operation on Mexico’s Lake El Salto, but not many realize he was one of the pioneers of peacock bass fishing in the Amazon decades ago.

Fishing pressure is much greater in the Amazon region than it was when he first took customers fishing there, he says. The floating suites — think motel rooms on pontoons — make it possible to find fishing areas with minimal pressure.

Every one or two days during our trip, Chapman’s crew would push the six cabins (four for customers, one for him and his lodge manager, Joshua Cruz, and a dining hall) off the beach, lash them together and tow them upriver. Consequently, we were often fishing virgin waters and gawking at new scenery.

Also, the suites and the tow boat were shallow-running enough to go far upstream to where the water levels were low and the fish were concentrated in accessible areas, such as river bars, coves and bays. The typical riverboat used in most peacock expeditions can’t navigate shallow stretches and usually is confined to major rivers such as the Rio Negro.

Having the suites nearby also made it possible to enjoy a siesta in an air-conditioned cabin during the heat of the day. We skipped that option after realizing that midday produced some of the better fishing. Instead, we paused at noon for a shore lunch of grilled fish or a sandwich and maybe a short snooze in a hammock.

On really hot days, we went swimming among the piranhas, stingrays and cayman. I learned that movie accounts of piranhas stripping every bit of flesh off a victim’s bones are mostly fictional. The children in camp were catching piranhas with hand lines off the beach where our cabins were tied up, and they thought nothing of swimming among the fish.

Our routine each evening after returning from fishing was to grab a plastic chair, sit in the water behind our cabins, enjoy a refreshing drink or two and relive the day’s excitement. I quickly got over the fear of being eaten alive — although I made sure I wasn’t the first in the water.

If you’re not a Bassmaster Elite Series professional, you’ll likely find that 6 1/2 days of hard fishing in 90-degree temperatures is grueling. Your arms are sore from casting and fighting dozens of belligerent fish, and your fingers are blistered and raw. But that final evening, as we unwound in the chest-high waters of the Jufari, we all dreaded the thought of leaving. Almost every one of us said we’d gladly stay another week, if that were possible. Some in our party have already scheduled a return trip.